At first, it was the Void Information Administration Bureau (虚空情報管理局, Kokū Jōhō Kanri Kyoku), a force consisting of the leaders and representatives from countries all over the world. It was created during the Great Dark War by Yūki Terumi and Seven of the Ten Sages. The rulers of countries that were not damaged by the Black Beast established their own department in the bureau. This new department was named Section 7 (セクション７, Sekushon Sebun), and its true purpose was to gather information on the Arch-Enemy Event Weapons held by the bureau, and to allow its originators to have a share in the bureau’s rights to rule over the world after the Black Beast’s defeat.

After the war, the bureau moved to the Magic City of Ishana and merged with the Magic Association, becoming the Void Information Management Agency (虚空情報管理機関, Kokū Jōhō Kanri Kikan, localized as Orbis Librarius Norma). The agency took control over the people and built Hierarchical Cities, which are located in high-altitude areas, to protect humans from the deadly amounts of magic element. After the Six Heroes disappeared, Ishana was forgotten, and only the Twelve Originators maintained their strength, which they used to keep the grimoires and control who should have access to them. Decades later, the agency has become what it is today, the World Void Information Control Organization.

The organization is ruled by the Emperor. Information on the supreme ruler’s location is kept strictly confidential, even within the Control Organization. The Emperor rarely appears in public, and only a few people know what the Emperor looks like.

The integrated headquarters (統合本部, tōgō honbu) are located in the 1st Hierarchical City of Ōkoto, and orders are issued from there to other city branches. However, sometimes orders are dispatched directly by the decree from the Emperor (帝からの命令書, Mikado kara no meireisho).

Although the organization claims they keep the grimoires from being misused, the people resented them for their tight control over the only thing that could let them use the Magic Formulas. A great deal of dissent was caused by this widening socioeconomic gap between those who could, and could not, use Magic Formulas. Years later, this dissent would eventually spark the Ikaruga Civil War, when the Ikaruga Federation openly rebelled against the Control Organization. After the war, the Control Organization imposed a harsher rule on the world, punishing any sign of rebellion with the death penalty.

During the Ikaruga Civil War, the Emperor, Tenjō Amanohokosaka, was slain by Jin Kisaragi. Her rightful successor was her child, Homura Amanohokosaka. However, Hazama and Relius Clover did everything to put Hades: Izanami in the Emperor’s place. Kagura Mutsuki had the real successor, Homura under his protection, as per Tenjō’s request. Eventually, Homura became the Emperor, as it should have been before.

The ranks of the Control Organization, from highest to lowest, are:[3]

The following positions are never seen noted amongst the organization’s military ranks: 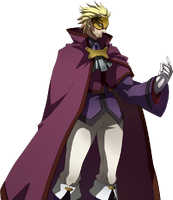