The Weaving Zero: Izayoi (零織・イザヨイ, Zero Shiki: Izayoi, localized as Zero-Type Izayoi) is an Anti-Observer Armament used by Tsubaki Yayoi. It is the released form of the Sealed Armament: Izayoi.

The Weaving Zero: Izayoi takes the form of clothing, as it is a Magic Formula Armament. When it goes into the battle form, the wielder gets defensive covering on the forearms, breasts and hips. The arming is a sword with the blade made of energy, which can change its shape, and two floating swords.

The floating swords, which are called “funnels” (ファンネル, fanneru), allow the wielder to fly on short distances.

While the Sealed Armament is a “shield” (盾, tate) capable of warding off intervention, the Weaving Zero is a “pike” (矛, hoko) with the power of the Immortal Breaker, the ability to slay “those that are outside of reason”, such as Rachel Alucard.[1] Specifically, the Immortal Breaker places death in the mind of its target. However, it is incapable of piercing those with the Power of Order, such as Jin Kisaragi.[2] 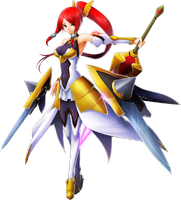 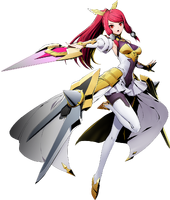 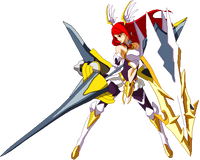 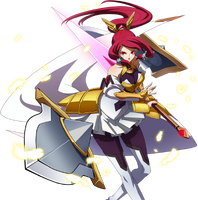