BlazBlue: Phase Shift 3
Totokaka (トトカカ), also known as the Kaka Tribe Elder (カカ族の長老, Kaka Zoku no Chōrō), is a wise and old member of the Kaka tribe who seemingly supervises them. She is quite intelligent, unlike most other members of the tribe, and she speaks very articulately, lacking the feline verbal tic common among most Kaka tribe members. Her first canonical appearance was in BlazBlue: Phase Shift 3, where she appeared as a young kitten next to her sister Suzukaka. She and her sister are the only two Kaka to have travelled to the Magic City of Ishana.

Totokaka has the appearance of an elderly Kaka with sliver hair and a messy sliver tail. She wears a skull mask to conceal her face and, like all Kakas, she wears a light brown jacket and her own unique, red fish zipper. She carries a cat-head staff with a crude face drawn onto it.

In her youth, Totokaka wore a normal Kaka kitten jacket with its signature bow and had light blue hair, like Torakaka, her hair came out of the jacket in a messy style. Two notable differences about her appearance as a kitten was that she had a small light blue fringe coming out of the hood of the jacket and a small skull on the tip of the hood.

In her old age, Totokaka is a wise, mature, and calm Kaka. She is a responsible and caring leader who prioritizes the safety and well-being of her villagers above everything, and is deeply concerned for the future of her race. She is also gracious and hospitable towards almost any outsiders who come into her village, regardless of their background.

Totokaka’s role is to protect and guide her village and tribe. In Calamity Trigger Reconstruction, it is revealed that she is the last of the first generation Kakas cloned from Jūbei’s genes. 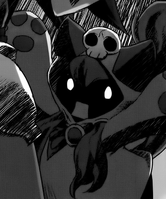