Tomonori had silver fur with black stripes, and wore an outfit similar to Jūbei’s, but colored magenta pink rather than yellow. The jacket also had black arrows that seemingly crawled up the paws.

Tomonori was a stern young beastman and polar opposite to his brother, Jūbei. Where Jūbei was concerned for righteousness and order, Tomonori was concerned for faith. Whenever Tomonori spoke, he often addressed others coldly and quickly, often leading to short discussions as he cut to the point of the matter. As well as placing a lot on faith, he also acknowledged that he had free will, and refused to be Clavis Alucard’s servant, meaning that the orders he was given, were not often followed out correctly.

Tomonori appears briefly in Phase Shift 1, attempting to stop Yūki Terumi from merging with Kazuma Kval. However, while he is unsuccessful in preventing the merging, he does manage to strike Terumi’s true form. Due to this, his right eye became the Sekigan (隻眼), an eye that can force Terumi’s true form to materialize. Jūbei’s right eye is in fact Tomonori’s, and was key to enacting Rachel Alucard’s plan of materializing Terumi’s true form many years later.

Well versed in wielding different types of weapons, fighting styles and ars, as well as incorporating such skills into his subordinates. Skilled at hiding his presence. Mentioned to be quicker than Valkenhayn at his prime. Capable of casting a small scale barrier, that imprisons and separates the target from the rest of the inhabitants in the area (even in crowded places), in a nearly undetectable manner for normal humans and mages. Capable of creating shockwaves with the released Hihiirokane. Skilled at penetrating even high level barriers, like the one that surrounds Ishana, as well as those protecting the inner parts of the Magic Association Sanctuary. 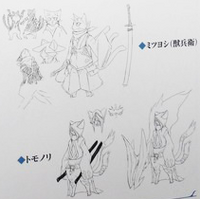