The Thundering Roar: Muchōrin (雷轟・無兆鈴, Raigō: Muchōrin, Thundering Roar: Unsigned Bell, localized as Arma Reboare: Muchōrin) is an Arch-Enemy Event Weapon with a form similar to a big wand. It is, or was, wielded by Platinum the Trinity; its previous wielder was Trinity Glassfille.

Nine created Muchōrin specifically for Trinity Glassfille, whose specialization is alchemy, using a part of Takemikazuchi’s core. It was meant to give her offensive skills as she was poor at attacking magic. With this, Trinity could fight, and at the same time it strengthened her defensive magic.

After the Great Dark War, Muchōrin’s core was released, but when Yūki Terumi attacked and threw Trinity into the Boundary, she sealed her soul in this wand. After that, this Event Weapon was kept by the World Void Information Control Organization, and eventually was stolen by Jūbei, and later given to Platinum.

Muchōrin is able to give form to matter. Using this causes Platinum to lose memories[1] – whether this means temporary loss or complete amnesia is uncertain.

It is unknown what happened with Muchōrin after it was used to materialize a copy of Hihiirokane.

[Character Select] Platinum with Muchōrin in her BlazBlue: Chronophantasma artwork

[Character Select] Platinum with Muchōrin in her BlazBlue: Centralfiction artwork 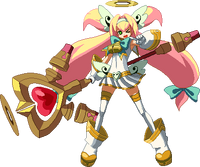 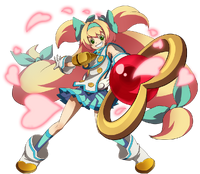 Trinity’s version of the staff