Tenjō was a young woman with long violet hair, and red eyes. She wore a Japanese red and white outfit reminiscent of empress with a purple cloak, and always wore a white mask with a red design symbol to conceal her face. Few have seen her face. Many believe that this mask hides a terrible scar, but in fact, it protects her weak body from the surrounding magic element, and hides who she really is.

Tenjō was the Emperor of the World Void Information Control Organization, and trained Kagura Mutsuki and Bang Shishigami.

She moves for the Ikaruga Federation to secede, but is met with opposition from other members on the committee who want to expand the Federation further using their advantageous position. After the destruction of the 5th Hierarchical City of Ibukido, the Federation makes a valiant effort to hold their ground, but is eventually defeated by Jin Kisaragi’s forces. Tenjō’s body is collected by Yūki Terumi.

Tenjō reported that the Control Organization had kidnapped the Machine God: Nirvana from the 7th Agency. After that, she went to the dungeon of the Wadatsumi castle to the Kushinada’s Lynchpin, where she also kept the Phoenix Wing: Rettenjō. Having removed her mask, she said that this vessel of her is already at the limit, and it will not be possible to use Nirvana as a new vessel. Wanting to prevent the resurrection of Izanami, Tenjō transferred her soul to Rettenjō. Not feeling her arms and legs, she could still control her former body. She took Rettenjō with herself and left the dungeon.

Knowing that activated Lynchpin will bring more troubles, so she did not use it to end the war. Instead, she decided to sacrifice herself, but in case the Lynchpin is needed in the future, she gave Rettenjō for Bang. Tenjō ordered her men to leave the castle, waiting for the killer to come for her, but the ninja leader, Bang, remained faithful to her.

A few days later, Jin Kisaragi attacked the castle, almost without resistance reaching Tenjō. He wounded Bang and froze the whole room, so he could not interfere. She ignored Bang’s request to run away, and started explaining to Jin that the coffin he had seen earlier contained something that consumes death, “war” in the flesh. Tenjō herself is only a “puppet” that will give birth to “death”. She asked him to put an end to this, and fight with the born “death”. She attacked Jin throwing one of charms, but he counterattacked it, slaying Tenjō. Her mask fell off, and Jin saw that in fact she was a beautiful girl with red eyes, without a single scar on her face. Furthermore, she looked exactly like his younger sister, Saya. Praising the Power of Order, Tenjō died, and Jin realized that the war started only for the sake of this coffin.

During the events of BlazBlue: Chronophantasma, Rachel Alucard hinted to Ragna, Kagura, and Kokonoe that Tenjō’s soul is in Bang’s Event Weapon, and therefore they do not have to sacrifice Celica Ayatsuki Mercury. Later, Bang activated the Lynchpin, by nailing Rettenjō into it, and cleared the world from the magic element. However, the properties of Tenjō’s soul are unknown, so it is unknown how long the effect will last.

In BlazBlue: Centralfiction, Ragna used his Drive to talk with Tenjō’s soul in the Lynchpin. She asked him to look after Bang, Kagura, and her child, Homura. Ragna absorbed this dream, returning it to the Blue, making it one of the possibilities.

Tenjō shows ability of moving her soul through various vessels. One of her bodies was a woman, with another being an Event Weapon, the Phoenix Wing: Rettenjō.

One of illustrations in Spiral Shift

Close up of Tenjō’s masked face 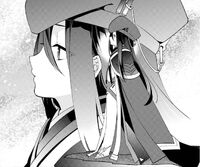 Tenjō as a child.

Tenjō without her mask.