Spinner was a tall, slender man with ghostly pale skin and short, ash colored hair. His eyes had abnormal black sclera and white irises. He had large canines that protruded like fangs, ears with several studs decorating them and an abnormally long tongue with a tattoo in the center. He wore a formal suit with golden lining alongside suit trousers and plain black shoes. He had a small tattoo on his forehead and another tattoo on the left side of his neck. He also wore a translucent purple scarf that came down to his feet.

One of the best conjurers that the Magick Association had to offer until his expulsion for coming too close to the Blue. He was on the search for Raquel Alucard and was using his Apostles to search for her; reason being that she has the ability to feel the Blue in a manner similar to a radar.

Near an arcade in the center of New Kawahama City, Spinner observed a concrete wall, and placed his hand on it, prompting ancient runes to arise. After studying the message, he said it was an interesting invitation, and licked the wall. A huge blue bug came towards him; Spinner thanked the insect for guiding him to the location, but stomped it underneath his foot. Perversely, the conjurer wanted to touch and lick the writer directly – the person who had wrote the message was none other than Raquel Alucard. After the battle between Tadayuki Isa and a squad Mitsurugi agents, Tadayuki was about to be dragged away after losing, only to have the agents consumed by a pitch black darkness; out of this darkness, Spinner arose. He began complimenting Raquel, calling her beautiful and gorgeous under the moonlight, although he confessed he was somewhat upset that it was not under a full moon. Afterwards, he introduced himself as Spinner Superior and asked for the whereabouts of Naoto Kurogane, only to have Raquel point at the young man in question; this confused the former conjurer and he asked again where Naoto was, with this, Raquel grabbed her servants arm to demonstrate who Naoto was.

As soon as Naoto was grabbed, he was sent airborne into the nearest wall as Spinner screamed at him to not touch Raquel, also claiming that Naoto should not think highly of himself because he defeated one of Spinner’s Apostles. Finally, Spinner confessed that he was not going to have Naoto “dirty” Raquel any later and had decided he would execute him immediately. Just as Spinner was about to attack Naoto, Kiiro Hikagami saved him with her Drive.

Spinner recognized the Drive and instantly knew that it was Kiiro, he closed his eyes, sneered and told her that a 'Mosaic' shouldn’t act so intelligent; to this Kiiro responded that she would annihilate him, with Spinner saying that a “stupid puppet” should know her place. However, their fight never took off as Raquel ordered the two to ceasefire since it was not the time nor the place to fight. Spinner agreed, claiming that it was only a time for greetings, and that the next time that they should meet, Raquel should bring with her the ’real' Naoto Kurogane, instead of something that was too weak.

Spinner was aware of Naoto’s existence because of Raquel leaving behind the note near the arcade to Spinner after Naoto’s fight with Valkenhayn R. Hellsing. The note stated: “If you want me, then you must first defeat my servant, Naoto Kurogane. If you can do it, I’m all yours”. However, Spinner misunderstood and believed Naoto to be on Clavis Alucard’s level.

Once Raquel and Naoto defeated one of Spinner’s bugs, the conjurer summoned a huge spider from his shadow to ensnare the vampire. Once caught, Spinner merged with the two, becoming a sickly creature with a spider’s lower half replacing his legs and hips. He then opened up a portal to the Boundary before viciously cutting off Naoto’s right leg and left arm. However, the conjurer could not stand up against the power of Naoto’s Drive, Bloodedge, and was savagely sliced multiple times; to make matters worse, Naoto courageously dragged Raquel out of Spinner. Losing Raquel forced Spinner to mutate even further into a black blob. His mind completely eroded, only being able to repeat that he wanted the Blue. Kiiro arrived and attacked Spinner, and they fought until Spinner was knocked down into the Boundary, never to be seen again.

Like other conjurers in the BlazBlue series, Spinner’s power was tremendous – being able to heal from any wound, and being able to summon a large amount of physical darkness to attack; his strength is enough that he could effortlessly demolish an entire squad of Mitsurugi soldiers. Despite being akin to a one-man-army, he also had multiple “Apostles”; ordinary men who, due to unknown reasons, became servants to the conjurer himself – although he could only have up to 15 Apostles at a time. 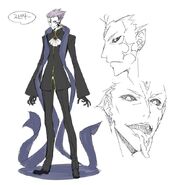