The Snake Pair: Ouroboros (蛇双・ウロボロス, Jasō: Uroborosu, localized as Geminus Anguium: Ouroboros) is an Arch-Enemy Event Weapon in the shape of a black snake head attached to a never-ending chain. It is wielded by Hazama, previously by Yūki Terumi and Kazuma Kval.

Ouroboros was used immediately after Terumi merged with Kazuma. However, at that time it wasn’t considered to be an Event Weapon, and Kazuma himself noted later that this chain was not the real deal.

The Snake Pair was created by Nine, using a part of Takemikazuchi’s core. After the Great Dark War, she began releasing cores from the Event Weapons, however, she didn’t manage to do it with Ouroboros, since Kazuma persuaded Trinity Glassfille to release the Mind Eater restraint from him, releasing Terumi’s will. After that, he killed both women, but Jūbei soon sealed him in the Boundary along with Ouroboros.

Once released from the Boundary, the ghost of Terumi took Ouroboros with him, and was able to use it despite the lack of a body. Ever since Terumi was separated from Hazama during the events of both Chronophantasma and Centralfiction, both of them were seen to have simultaneous access to this Event Weapon.

Ouroboros is summoned from a special space, and can directly attack the soul or mind of the target. The same weapon grants its wielder a Mind Eater ability, which allows its user to manipulate a person’s memory, removing it and restoring. Hazama uses this ability once to unlock Tager’s memories of the massacre happening during the Event Weapon Dispossession Operation. In Terumi's case, the Mind Eater ability also manifests as his Drive ability, Force Eater. 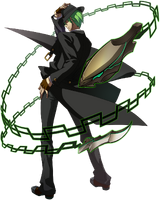