The Slaying Demon: Ōkami (斬魔・鳴神, Zanma: Ōkami, Slaying Demon: Sounding God, localized as Interfectum Malus: Ōkami) is an Arch-Enemy Event Weapon with the shape of a nodachi. It is wielded by Izayoi,[1] and previously by Hakumen.

Ōkami is made of metal that nullifies the Magic Formulas in a certain radius from the blade.[2] After the Great Dark War, the core of Ōkami was released, and therefore it is now much weaker than before. Hakumen is also able to use Ōkami to directly slash dimensions, allowing him to view other parallel timelines or dimensions.[2] However, it is unclear if this is an ability of Ōkami itself or a display of the Susanoo Unit’s ability to slash time.

The Great Dark War is the time when Hakumen gets equipped with this weapon. After the events of BlazBlue: Centralfiction, a person named Izayoi wields Ōkami.[1] 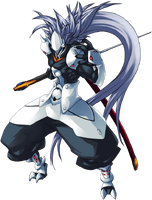 [Character Select] Hakumen with Ōkami in his BlazBlue: Chronophantasma artwork

[Character Select] Hakumen with Ōkami in his BlazBlue: Centralfiction artwork 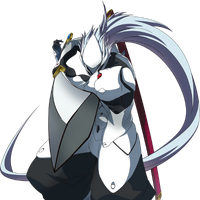