After the death of Konoe and Celica’s mother, Shūichirō began to spend almost all of his time focused on his research. It is unknown why, but Shūichirō and Konoe had a very strained relationship, almost mirroring the relationship between Jūbei and Kokonoe. According to his logs, he seemed to admire Relius’ genius, maybe even envy it, to the point where he took great pride that he was able to develop a countermeasure (the Lynchpin) to Relius’ experiment in case of an emergency, all while Relius was seemingly unaware of it. On the surface it may seem like Shūichirō genuinely cares for Celica, but it can also be interpreted that she is so precious to him because she is the key to the Lynchpin, as in his last moments he boasts about developing the device he believed would save mankind from the Black Beast, although it would require Celica’s sacrifice. Overall, it seems that Shūichirō cared more for his research than anything else, even his own family.

The father of Konoe and Celica, Shūichirō Ayatsuki was a scientist working with Relius Clover before the emergence of the Black Beast. According to BlazBlue: Phase 0, Shūichirō created Kushinada’s Lynchpin, referring to it as, “the nail that will nail [the entrance to the Boundary] shut”. He also made mention of a ”key”, referring to it as if it were something to be raised and that the lynchpin was incomplete without it.

When Shūichirō first got to work with Relius, he referred to him as a genius. He had a hand in creating a special Prime Field requested by a man with green hair. According to Shūichirō’s logs, the Original Unit was said to be recovered from the Alucard family. He personally saw Relius getting swallowed up by the Black Beast. He began to panic and decided that using the lynchpin was the best solution. However, the key was not there, it having slipped from his grasp. As he waited for his eventual death, the last two lines in his log were: “I can no longer do anything anymore. All I can do now is just wait for my life to end…”.

Avoiding being swallowed by the Black Beast, Shūichirō survived inside the First Area for, in the distorted time, a whole year; the actual time that had passed outside of the Area was 6 years. After Konoe, Celica, Trinity Glassfille and Ragna the Bloodedge had looked at the Kushinada’s Lynchpin, Shūichirō revealed himself, shocking Celica to tears.

With the magic element poisoning taking place, Shūichirō had, physically, become a shadow of his former self, with Celica barely recognizing him. After hysterically claiming that he had finally beaten Relius with the creation of the Lynchpin, he collapsed, begging Celica to complete his work and hinting at her to become the key that will activate the Lynchpin itself. For this, Konoe blasted him at the nearby wall, only to be met with insane, triumphant laughter. He finally succumbed to his wounds from the magic element poisoning and passed away, leaving only Celica with tears in her eyes. 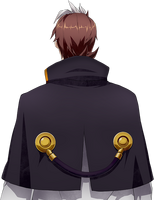