The Sealed Armament: Izayoi (封印兵装・十六夜, Fūin Heisō: Izayoi, Sealed Armament: Sixteen-Day-Old Moon, localized as Sealed Weapon Izayoi[1]) is a Magic Formula Armament wielded by Tsubaki Yayoi, and previously by Ayame Yayoi during the Great Dark War.[2] It is kept under a special lock that can only be opened from the blood of a person from the Yayoi family.

The Sealed Armament: Izayoi takes the form of clothing, gives Tsubaki sword resembling a quill tip and a book-like shield; however, it can change its shape for some of her attacks. It also has a different true form.[3]

Created long ago to fight the Observers, it served as a model for the Arch-Enemy Event Weapons that were produced later. The Sealed Armament: Izayoi is actually the Murakumo Unit prototype.[4][5][6]

The Sealed Armament: Izayoi raises the user’s power by several times in exchange for their “light”. Due to this, using the weapon for an extended period of time will cause the user to go blind, or in the worst case, it will cost the user’s life. Along with its wielder’s light, it draws in all waves within the electromagnetic spectrum, including the radio waves received by Tager’s radio, allowing the weapon to interfere with radio signals.[7] As its true power is the complete absorption of a specific wavelength of light, serving as an Anti-Observer Armament. It can even fully neutralize Event Interferences. Any wielder of the Izayoi is capable of deploying the Eclipse Barrier, an extremely powerful Magic Formula that creates a space that is completely separated from the outside world.

It is a “shield” capable of warding off intervention, while its released form, Weaving Zero: Izayoi, is a “pike” with the power of the Immortal Breaker.

According to Valkenhayn, many of the Izayois were produced, but only one or two remain today. 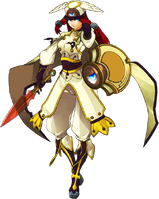 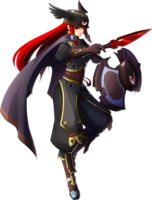 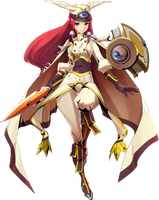 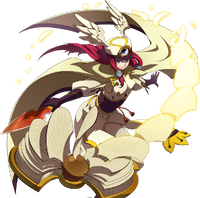 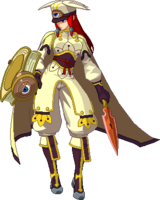