The Phoenix Wing: Rettenjō (鳳翼・烈天上, Hōyoku: Rettenjō, Phoenix Wing: Violent Heavens Above, localized as Phoenix: Rettenjō) is an Arch-Enemy Event Weapon with the shape of a giant 55-inch nail. It is in possession of Bang Shishigami, and previously of Tenjō Amanohokosaka and Trinity Glassfille.

Rettenjō was created by Nine, who used a part of Takemikazuchi’s core for it. The nail itself is the core of Kushinada’s Lynchpin, which has the ability to stop the functionality of magic element, resulting in the rendered uselessness of Magic Formulas. It is also the Anti-Event Weapon with power to destroy other Event Weapons.

Nine, concerned that people who survived the Great Dark War would use the Event Weapons against each other, created this nail secretly, and entrusted it to Trinity Glassfille. However, after they were killed by Yūki Terumi, Rettenjō’s whereabouts became unknown, and it was believed to have been lost.

During the Ikaruga Civil War, Rettenjō was in Tenjō Amanohokosaka’s possession. She didn’t use it against the soldiers of the World Void Information Control Organization, and before her death, she gave this Event Weapon to Bang Shishigami, sealing her soul inside of it. Bang was unaware of the properties of the nail, until Trinity warned him, and later Relius Clover told him more about Rettenjō’s abilities.[1]

During the story of BlazBlue: Chronophantasma, Bang used Rettenjō to activate the Kushinada’s Lynchpin, stopping magic element’s activity in the world. During the Embryo incident in BlazBlue: Centralfiction, the nail stays in the Lynchpin, but is also seen with Bang. In the world rebuilt by Ragna with the Book of the Blue Blaze, Bang is seen without Rettenjō. 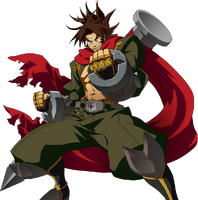