The Machine God: Nirvana (機神・ニルヴァーナ, Kishin: Niruvāna, localized as Deus Machina: Nirvana[1]) is an Arch-Enemy Event Weapon in form of automaton. It is 195 cm in length and feminine in appearance. Its wielder is Carl Clover, and previously Celica Ayatsuki Mercury.

Nirvana protects the one whom she identifies as her master. She automatically attacks all those who want to harm her wielder. In addition, Nirvana is able to ignore orders in such situations.[2]

She’s able of close combat, and is capable of space transition on short distances. Her nails are made of metal covering the Kushinada’s Lynchpin, so she can influence the magic element.

Nirvana’s effect on the user’s mind is a controversial subject. According to Litchi, Tager and Hazama, she inflicts madness on her owner’s mind or possesses them. On the other hand, Hakumen stated that Nirvana is driven by its owner’s killing intent and that others are just trying to shift the blame.[3]

During the Great Dark War in 2107, Nine created Nirvana as Celica’s bodyguard as she had no means to protect herself from the dangers at the time.[4] At that time, it was just a mechanical doll, magic-tuned to protect its wielder. Back then she had pupils, and no scratches on her face. Nirvana was always with Celica, but when the latter was in the Magic Association Academy, she was waiting for her in a special room provided by Nine. Celica prepared a sofa in her room, so her protector had her own place in the house.

When the Highlander: Takemikazuchi gained its own core, Nine divided half of this core into eight pieces to create the Arch-Enemy Event Weapons. One of the pieces was placed in Nirvana, so then she became one of the Event Weapons.

Nirvana and Celica had a mission to complete in case when the Six Heroes lose in the final battle against the Black Beast – Celica had to use her magic and defeat the monster with Takemikazuchi, which would eventually kill her. After that, Nirvana was supposed to destroy the Highlander, and protect the remnants of mankind.

After the Great Dark War, Celica released Nirvana’s core and sealed her in a place where the 4th Hierarchical City of Naobi was built, hoping her protector will forgive her.

In 2193, Nirvana was found by the 7th Agency, causing the Event Weapon Dispossession Operation to happen. They sent a mercenary troop to recover her, but as soon as they dug her out the soldiers of the World Void Information Control Organization appeared. During their fight, Azrael appeared, along with the reactivated Nirvana, and killed everyone except the captain of the troop. At the last moment, the Agency’s officers were able to evacuate Nirvana and the survivor, and forwarded her to Relius Clover.

After delivery of her, Relius noted that she had no physical defects, but was empty inside. He used his daughter’s body and soul to restore her, but was apparently only partly successful. He gave up this experiment halfway and installed in Nirvana an Event Weapon Imitation, so it could move even for a few minutes, and, taking it with his new creation, Detonator: Ignis, went to Kokonoe Mercury.[5] With her, he conducted an experiment to create an Event Weapon. At the very end, after Kokonoe incapacitated newly created Black Beast using Infinite Gravity, she used the rest of her powers and injured Relius using Nirvana under her magic control. However, he escaped with both automatons and the body of Nu-13.

At some point in time, Carl found Nirvana after Relius abandoned her.[6] He modified her and increased her capabilities. After that, he fled with Nirvana from the home, and for a while stayed with relatives of his mother, Francis and Rosenne. Then, he became a successful and recognizable vigilante who mastered using Nirvana. 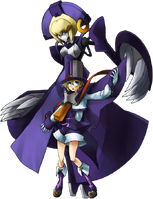 [Character Select] Carl with Nirvana in his BlazBlue: Chronophantasma artwork

[Character Select] Carl with Nirvana in his BlazBlue: Centralfiction artwork 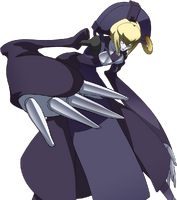 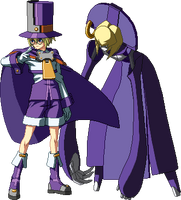 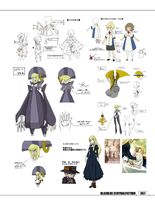