Kaka (カカ) is a tribe (族, zoku) of seemingly humanoid cat-people. It is a race created at the beginning of the Great Dark War of genes of a beastman, Mitsuyoshi. They were originally intended to be used as weapons against the Black Beast.

The original village of the Kaka tribe was founded by Munefuyu, Mitsuyoshi’s youngest brother, not too far from the island of the Magic City of Ishana. The Kaka hot springs are nearby. Now, the Kaka tribe lives in the Lost Town, which is built in the lowest level of the 13th Hierarchical City of Kagutsuchi.

They are just like cats, it means careless, always want to play. Usually, they refer to themselves in third person and end their sentences with “meow” (にゃす, nyasu).

Physically, they are more similar to half-beastmen or demi-humans than to beastmen. All Kakas wear specially designed jackets, and their faces are actually hidden, leaveing only their eyes and teeth visible to the average person. Like species of cats found in the modern world, there are a multitude of different “breeds” of Kaka, with this trait being shown in the color, pattern, and shape of their tails.

Each generation of the tribe selects one warrior who will protect their village. In this generation, it is Taokaka. Due to her travel with Ragna the Bloodedge, their previous protector, Torakaka was asked to replace her temporarily, but then, she could not do this, as she had a mission within the Ikaruga Federation. Eventually, the guardianship was temporarily passed onto Momokaka.

The Kaka population cannot go beyond 100 members, because male Kakas are extremely rare. It is believed that the village is on the verge of extinction.[1] 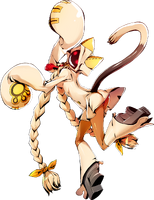 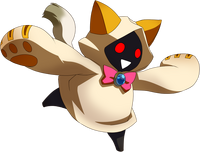 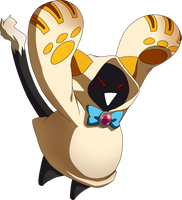 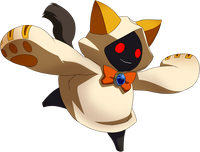 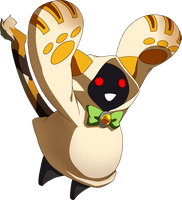 Suzukaka
Add a photo to this gallery

Retrieved from "https://blazblue.fandom.com/wiki/Kaka?oldid=113441"
Community content is available under CC-BY-SA unless otherwise noted.