Hihiirokane (, Time-Killing Blade) is one of the relics of the cat-beastmen tribe, a symbol of their village destroyed during the Great Dark War.

It’s unknown who created this weapon and why, but Nine said it’s as old as the Sealed Armament: Izayoi. How the beastmen received it is unknown.

Tomonori was sent by Clavis Alucard to the Magic City of Ishana for the surveillance of Kazuma Kval, who was Yūki Terumi’s goal. Unlike Clavis, Tomonori didn’t believe that Kazuma could not succumb to Terumi and live a normal life, so he went against the orders and decided to kill the schoolboy, and stole Hihiirokane from the village.

He managed to arrive at Ishana’s Kiln at the beginning of Terumi and Kazuma’s merge, and even left a wound on the latter’s stomach. Eventually, Tomonori was killed. Valkenhayn R. Hellsing, who arrived at the end of this battle, took the body of the beastman and his weapon to the Alucard castle. Later, Rachel, Clavis’ daughter, gave his brother, Jūbei the Eye of Tomonori, which saw the ghost form of Terumi.

In the last battle during the Great Dark War, Jūbei used Hihiirokane to cut a hole in the Black Beast for Celica, Nine’s sister, so she could enter its insides.

After the war, Hihiirokane was sealed in the Alucard castle, in Clavis’ coffin, and protected by a Magic Formula, the Absolute Defense Type Zero: Mirror’s Edge. Later on it was retrieved by Terumi, who used it to completely sever his connection with Hazama, after which he absorbed the weapon.[1] After making it a part of himself, he used it to attack Hakumen and take the Susanoo Unit from him.[2]

With Tomonori’s Eye and Muchōrin, Platinum created a copy of Hihiirokane, which eventually was entrusted to Jin Kisaragi, who was placed in the Susanoo Unit, and cut down Terumi together with Ragna the Bloodedge, sending them to the Boundary Line of the Blue.[1][3]

Hiihiirokane is able to attack not only the body, but also the soul, which makes it suitable for battling those in a “ghost form”. It can change its shape: 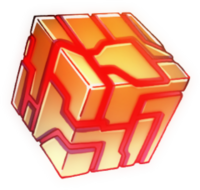 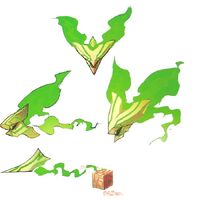 Sword form
Add a photo to this gallery

Retrieved from "https://blazblue.fandom.com/wiki/Hihiirokane?oldid=119516"
Community content is available under CC-BY-SA unless otherwise noted.