Hōichirō is a strict man with short dark hair. He wears a formal outfit of Hazuki family household.

Hōichirō appreciates strength, and pays great attention to training. He is very strict, but still accepts Mai, and her gender does not matter, as long as she is strong enough to not stain the honor of Hazukis with weakness.

Hōichirō sends Shiori Kirihito and Chachakaka to kill Mai, but in fact it is just a test to see if his child is strong enough.

Hōichirō sends his maids to bring Mai and her friends, after Rachel Alucard teleported them to the neighborhood of Hazuki’s house. He calls Mai to himself and chastizes her, saying that the Control Organization ordered to restrain her group, but the affairs of the Hazuki family are more important to him. Mai thought that she had stained the Hazuki name by becoming a woman, but Hōichirō said that she became a disgrace to the family when she lost to Meifang Lapislazuli.

Deciding to personally check on her, Hōichirō offers her a deal: if Mai can force him to step back, he will let her and her friends to go, but if Mai loses, he will hand them to Meifang. Seeing Gallia Sphyra: Outseal, he says that this weapon does not suit a coward who is not able to fight and needs protection. Angered Mai attacks him, but she gets defeated, and he takes the spear from her. Hōichirō gives Mai another chance, saying that one week from now they will repeat this fight, and if she loses again, then he will kill them all, and until that rematch, Outseal will be in his possession.

Leaving, he tells Julian, their maid, to inform Kagura that the children are under his protection.

Hōichirō, the Martial Lord and once the Supreme Commander of the Control Organization, appears to be very strong. In the past, he was able to take down alone Azrael.[1] He easily overpowers Mai during their first match.

A vision of Hōichirō appearing in Mai’s nightmare.

A flashback of him and his wife with infant Mai in his arms.

Hōichirō on the cover of BlazBlue: Variable Heart Chapter 15

Hōichirō defeats Mai and takes away her weapon. 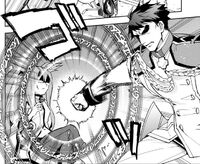 Hōichirō when he was in the Control Organization.