Grimwood was a captain of the 9th Squad, and was secretly working for Kokonoe Mercury of the 7th Agency. Some time before his meeting with Jin Kisaragi, he rescued Karenjina Parsett from a laboratory that studied souls, where she awakened her Drive. She joined Grimwood and his 9th Squad as a mercenary, wanting to stop the ongoing Ikaruga Civil War.

In 2197 on a summer day, Grimwood met First Lieutenant Kisaragi when he and Corporal Honoka were arguing with Corporal Parsett in the tent of the 9th Squad. Huster introduced himself and her. Soon, a siren began to howl, announcing the approach of the enemy, and the 9th Squad had to join the battle.

Shortly after Jin’s battle with a stone giant, the 9th Squad was deployed on a mission in the 7th Agency’s laboratory, to recover an Arch-Enemy Event Weapon stolen by them from the Control Organization. They arrived two hours late, finding only corpses which looked like living people without souls. When the soldiers were about to leave, the undead attacked them. They quickly realized that the corpses were being controlled by someone. Karenjina used her Drive to find the necromancer. After they dealt with him, the soldiers noticed that it was just a doll, and behind it is a magician. Unknownly to them, it was Relius Clover who was watching nearby, and analyzed Jin’s Event Weapon, Yukianesa, and Karenjina’s Drive, Seagull.

Grimwood later explained to Jin that Tenjō Amanohokosaka is the Emperor, and that the war will not end until someone’s goal is achieved. He said that somewhere near is a weapon capable of stopping the activity of the magic element, and someone wants to get it, so they need to find it and destroy it. Jin agreed to help, but threatened that he would kill Grimwood if he tried to use the weapon instead of destroying it.

The 9th Squad found a suspicious place thanks to Karenjina’s Drive. Grimwood did not allow her to enter that place, so she stayed at the entrance. There, he and his soldiers found a little crystallized magic element, saying that here was created the stone giant, which previously Jin defeated. Grimwood believed that the enemy they are searching for is responsible for distributing weapons to the Control Organization, the 7th Agency, and Ikaruga. After going through the ruins further, the soldiers noticed a liquid magic element, and ancient inscriptions on the walls, which Grimwood read. After being urged to go deeper into the facility by Jin, the squad was separated from the former.

Inside the area, the 9th Squad was ambushed by the 0th Division and their leader, Meifang Lapislazuli. Grimwood witnessed her killing his soldier, and attacked her with fury.

Jin returned by the time Meifang cracked down on two more soldiers, and seriously injured Grimwood. She explained to Jin that the 9th Squad rebelled, almost leading the 7th Agency to the Imperial Palace, because Grimwood was working for Kokonoe. Grimwood called her a monster, to which outraged Meifang decapitated him. 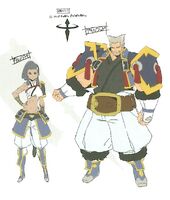 Grimwood appears in the flashback