The Detonator: Ignis (・イグニス, Detonētā: Igunisu, Wave Weapon: Ignis, localized as Fluctus Redactum: Ignis) is the only known Detonator with a form of a combat doll. It is 209 cm (6'10") in length and feminine in appearance. Its wielder is Relius Clover.

Relius created this Detonator in Ikaruga. It is based on the Event Weapon, Machine God: Nirvana. He used his own wife, Ignis, to create it. According to him, Detonator: Ignis surpasses the Event Weapons and the Prime Fields.

During the Ikaruga Civil War, Ignis was equipped with only an Event Weapon Imitation, but after the Event Weapon smelting experiment, she gained a core, which is a compressed Black Beast – this gave her a pseudo-individuality and allows her to Observe. She Observes herself to be stronger, and Observed as Izanami used Takamagahara to oppose Amaterasu Unit’s Event Interference.[1]

Relius wanted to create a new Master Unit out of Ignis, but he did not succeed.

Ignis is a deadly hand-to-hand combatant, using her massive claws in battle to slash and punch her opponents. She is capable of shapeshifting parts of her body into various weapons such as drills, scythes, and even turning her entire body into a makeshift buzzsaw. She can also detach her hand and toss it at enemies like a boomerang. Like Nirvana, she can fire black energy spheres that ensnare opponents and explode after a few seconds delay. 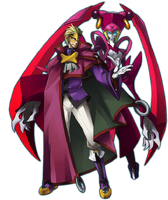 [Character Select] Relius with Ignis in his Continuum Shift artwork 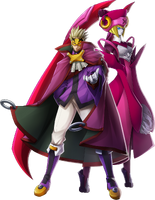 [Character Select] Relius with Ignis in his BlazBlue: Chronophantasma artwork

[Character Select] Relius with Ignis in his BlazBlue: Centralfiction artwork 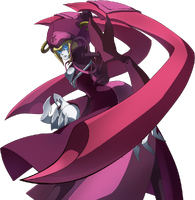 [Sprite]
Add a photo to this gallery

Retrieved from "https://blazblue.fandom.com/wiki/Detonator:_Ignis?oldid=116347"
Community content is available under CC-BY-SA unless otherwise noted.