The Demon Guns: Bolverk (魔銃・ベルヴェルク , Majū: Beruveruku, localized as Arcus Diabolus: Bolverk) is an Arch-Enemy Event Weapon in the shape of a pair of handguns. It is wielded by Noel Vermillion, and previously by Three and other people.

The Demon Guns were created during the Great Dark War by Nine, and it uses a part of Takemikazuchi’s core. It had a multitude of owners, including Three of the Ten Sages.[1] Bolverk was given to so many owners over time, and was lost after the war, with its core being never released.

The present wielder is Noel Vermillion. When she was still a child, she was attacked by a monster – then, for some reason, Bolverk suddenly appeared in her hands allowing to protect herself. Since that time, the Demon Guns are with her.

Bolverk can perform attacks at will in the desired location, regardless of walls and other obstacles, detonating a Magic Formula-based blast wherever one aims it.[2] Its standard form is a pair of handguns. It is able to change its shape, and the following forms were seen:

This Event Weapon served also as a limiter to hold back Noel’s unstable emotions, not allowing her to awake as a Dimensional Boundary Contact Prime Field No. 12, Mu. Eventually, her strong hatred unleashed the limiters, and Yūki Terumi smelt Noel into the God Slaying Sword, Kusanagi.[5][6] 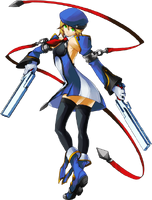 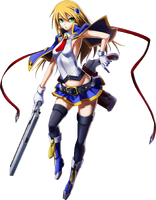 [Character Select] Noel with Bolverk in her BlazBlue: Chronophantasma artwork 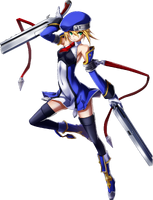 [Character Select] Noel in her alternate outfit with Bolverk in her BlazBlue: Chronophantasma artwork

[Character Select] Noel with Bolverk in her BlazBlue: Centralfiction artwork

[Character Select] Noel in her alternate outfit with Bolverk in her BlazBlue: Centralfiction artwork 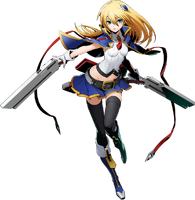 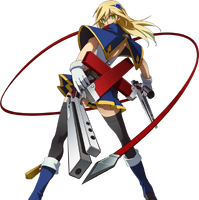 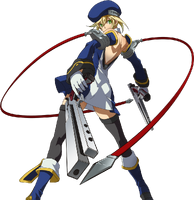 [Unlimited Vs]
Add a photo to this gallery

Retrieved from "https://blazblue.fandom.com/wiki/Demon_Guns:_Bolverk?oldid=117229"
Community content is available under CC-BY-SA unless otherwise noted.