The Demolishing Blade Manifestation: Kusanagi (示現崩剣・クサナギ, Jigen Hōken: Kusanagi, localized as Sword of Destruction: Kusanagi) is a Legacy Weapon in the form of four paired blades. It was stolen by Sechs of the Ten Sages from the Magick Association.

This weapon requires a level of magical power that few people possess, and generally cannot be used for any extended time. As Kusanagi is comprised of eight blades in total, Sechs’ mastery of gravity-based sorcery allows him to utilize it to its fullest.

In addition to being a deadly weapon in its own right, it also has the ability to nullify any kind of Event Interference. In the hands of someone as powerful as Sechs, it can also manipulate the space/time continuum, allowing small changes to reality to be made.

Its price of use is “shared existence”, which means that the wielder will be the sum of all timelines, for example, if the user sustains a wound from one timeline, it will be present in another. 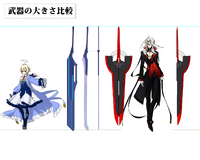