The story revolves around Kazuma, a young student of the Magic Association. Celica apparently dislikes him and feels uncomfortable being around him. It seems that he is actually not human, and was created by Relius Clover to act as a new body for Yūki Terumi (who it seems loses his previous body whenever the Black Beast appears and vanishes). Terumi does not take over the body, rather he needs to form a mutual pact with Kazuma to fuse with him.

To try and stop that, Mitsuyoshi’s younger brother, Tomonori, goes after Kazuma to kill him. He arrives too late and Terumi has already obtained the body. Terumi uses Ouroboros to kill Tomonori, but then gets defeated by Mitsuyoshi and Valkenhayn, and is sealed away by Clavis Alucard until the Great Dark War, when Konoe disregards the potential danger and unseals him. She uses a restricting compulsion spell on him called “Mind Eater” that basically makes him a puppet that has to follow her orders and help them defeat the Black Beast.

AD 2106. The world is in chaos from the threatening Black Beast. At the Magic Association-governed island, the Magic City of Ishana, a student Kazuma lives a normal life. But when he meets Yūki Terumi by chance, history receives a new Phase Shift.

“If you can get the Blue, you can take back whatever you want. Things you lost, things you forgot, whatever.”

Is that the prelude of destruction? Or a gospel of salvation…?

Within the light and darkness of the Boundary, hope and despair blend together. The curtain for a new episode of BlazBlue’s official story has been raised!

The novel is 280 pages long and split into a prologue, six chapters and an epilogue. 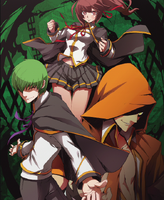