The objective of Battle × Puzzle is to form a horizontal or vertical chain of three or more gems of the same color to defeat enemies, while the character is running to the end of the stage. Instead of swapping gems, the player has to move the entire lane, and moves that don’t create a match are allowed.

The screen is horizontally divided into two parts. The top shows the player’s character and nearby enemies, as well as the pause button, acquired power-ups, the Drive gauge, and various counters. The bottom is where the gems are placed. All enemies have their own color, and the player must match gems of corresponding color to defeat them.

Matching gems fills up the Drive gauge. When this gauge is full, a special icon will replace one of the gems. Pressing this icon grants the character temporary invincibility and a boost in speed, until the Drive gauge is completely depleted. Rarely, special icons will appear among other gems, which, upon matching, summon a support character, who can send the player’s character forward on the level, or destroy all nearby enemies. 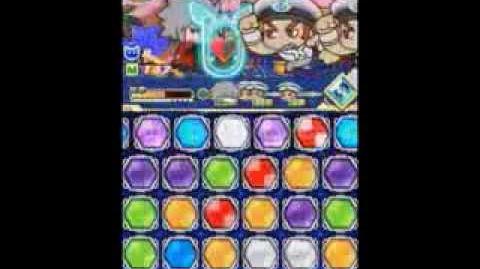