Download
BlazBlue: Battle × Battle (ぶれいぶるー·バトル×バトル-, BureiBurū: Batoru kurosu Batoru), released outside Japan as BlayzBloo: Super Melee Brawlers Battle Royale​, is a 3D arena fighting game developed by Arc System Works. It was published in Japan by Arc System Works on January 27, 2010 and for the Nintendo DSi (XL) as a downloadable DSiWare title. The game was released in North America on August 2, 2010. The game later became available on the Nintendo 3DS and its other iterations by extension of backward compatibility.

After late March of 2023, this game and Blazblue Clonephantasma will be unavailable, meaning there's no other way to play it, unless they can redownload the game if they purchase it before.

The game features five characters. Each character has one basic attack and a drive attack, as well as a description.

There are three modes.

Players can play against others via Local Play, meaning all players must have downloaded a copy of the game on their consoles, which includes the Nintendo DSi (XL) and any console in the Nintendo 3DS family. There can be up to four players per match. CPU players join in if there are fewer than four human players. It is possible to play between different consoles that support Local Play. 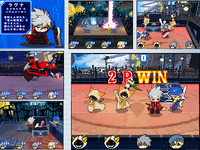