Active (as Platinum the Trinity)

Bell is a young girl with long blond hair reaching to her heels, and green eyes. She wears a white tattered dress with short sleeves. In addition, she wears an oversized collar, a bell on her neck and handcuffs. She doesn’t take off the bell even when taking a bath. She doesn’t wear shoes.

Bell appears to be an emotionless girl who does not know much of the world, but she is able to feel, and uses sophisticated words, which are usually difficult to understand for a child. She acts serious, and appears to be attached to Mai.

In June 2197, she was being transported in a coffin that Meifang Lapislazuli sent to the 13th Hierarchical City of Kagutsuchi. When Mai boards the same train with Kajun, she hears calls coming from the coffin, and eventually goes to find their source. Mai easily breaks the seals on the door leading to the room with the coffin and they go inside. Here, they are attacked by the World Void Information Control Organization officers, but Jūbei protects the girls. Mai then hears another call, and attacks Jūbei, protecting the coffin. Then, the train collapsed, and Mai with the coffin ends up on a snow field, separated from everyone else.

Mai notices a girl standing on the coffin, and since she cannot leave a child alone, she accompanies her. She introduces herself to the young girl, and asks the girl to wait, saying that she still has a friend to find – to which the child says that the woman that was with Mai before is safe, and this place is dangerous, so therefore it’s better to leave as soon as possible. After following the girl a little more, Mai begins to call her “Bell”, because she finds it strange to constantly say “you” and “hey”, and the girl accepts it, since a name does not matter to her. Mai mentions Kajun again, saying she’s her dear friend, and it’s necessary to go look for her, but she can’t leave Bell unattended. Suddenly, Bell falls down from hunger, so she and Mai take cover in a cave, where Mai shares some food prepared by Kajun with the girl, asking if it’s tasty. Then, she tells the child to call her by name, because she kept saying “you” all the time, and asked about the real name of her companion. Bell replies that names are used only to identify someone, so Mai can call her what she wants. Mai attempted to shake hands, but her stomach rumbled, and Bell shared the food with her. She asks her if this food is “tasty”, and Mai responds she doesn’t feel taste, but Noel’s cooking is delicious, and makes her feel space. Bell asks if this “Noel” is another dear friend, and is responded that Noel is not the only dear friend to her. There are also Tsubaki, Makoto, Kajun, Shiori, Taro, Akane, Jin Kisaragi – her dear friends thanks to whom she chose to be what she is now. Their conversations lasted until the night, when it became cold. Mai hugs Bell to warm her, and they both fall asleep.

In the morning, Bell calls Mai by name, saying that she can wait for her in the cave, so she can go look for her friend. She adds that it would be difficult for her to reach her destination alone, so she would like to continue to rely on Mai’s help. She hugs Bell so tightly that the girl asks her to leave quickly, but they didn’t even have time to say goodbye, as the child felt something and hides behind Mai. At the same moment, Ragna the Bloodedge approaches them, complaining about Jūbei’s failure, and says he needs to “destroy” Bell.

Mai defends the girl from Ragna’s attacks, but eventually he gripped Mai by her throat and lifted her from the ground, and Bell, who haven’t even thought about escaping, recognizes his Drive, Soul Eater, and attacks him with her small fists, demanding to release Mai. This reminds Ragna of Saya, and he releases the girl, but then gets tied with Taro’s strings, who comes to help along with Kajun and Shiori. Bell warns them to escape, because Ragna has the Blue Grimoire. He easily frees himself from the strings, but he didn’t have time to attack anyone, since Fuzzy, who watched the conflict, blocked his way to Bell, becoming interested in his grimoire. The child realizes they are in a terrible situation, and Shiori offers to escape, but the vampire raises ghouls, cutting off the path to retreat.

Shiori’s poison does not work on ghouls, so she can’t be of much help, Taro needs some time to weave new strings, but Kajun was able to set them on fire with her chemicals, protecting Mai, weakened in her fight with Ragna, and Bell, who is incapable of fighting.

Meanwhile, Mai stared at Ragna sensing the Blue from him, and not wanting to leave it. Bell gently patted Mai on the cheeks, reminding her that Taro and the other two are her dear friends, whom she would not abandon for anything, so she shouldn’t be distracted by the Blue. Mai corrects Bell saying that she’s also her friend, and then she throws Gallia Sphyra: Outseal at Fuzzy and his bone dragon. This attack defeated the dragon, for which Ragna praises her calling her “big tits”, and Bell, together with Shiori, hit him for it. Fuzzy regained his strength, and Taro first takes Bell in his hands, and then also Kajun and a weakened Mai, evading the attacks of the vampire. Kajun explains that Mai is weak because of Outseal, which doesn’t have a limiter yet. Bell confirms it, and says she doesn’t feel the suppression of the will from the spear. Without a limiter, this weapon absorbs Mai’s soul, and in the best case she can use it only two more times. Deciding they can’t just leave Ragna and he should be helped, Mai decides to use Outseal one more time, and with her friends she starts to implement their plan, interrupting the activation of Ragna’s Blue Grimoire, which made Fuzzy furious.

In rage, he managed to get Bell with an attack, throwing her off Taro’s back, but she Ragna catches her, saying she’s safe, and the rest of them can continue what they’re doing. The child stares at Ragna, and he tells her not to get the wrong idea as he simply keeps his priorities straight.

Mai manages to seriously injure Fuzzy, but he gets rescued from the finishing attack by Meifang Lapislazuli. Ragna puts Bell on the ground and runs to help Mai, and the little girl runs to Taro. Suddenly, the group gets surrounded by soldiers of the 0th Division. They are saved by Rachel Alucard, who uses transition magic to move them to a safe place.

Watching them from afar, she instructs Valkenhayn to take away Ragna, who is making a lot of noise, while she herself wonders what Jūbei will do now. Rachel explains that Bell is a Reciprocal Observation System: “Lunasena” (相互観測システム『ルナセナ』, Sōgo Kansoku Shisutemu “Runasena”), but because of an emergency she began to self-identify herself as a self-defense measure, and because of this “those children” might not wake up. It doesn’t matter for Rachel, but their awakening is important for Jūbei, and so Trinity Glassfille appears, saying she can help with it.

Bell sees a building in the distance, and Mai recognizes her home. After they get closer to the house, the maids of Hazukis appear and invite the company inside. Soon, Mai’s mother appears and introduces herself as Rin Hazuki. Seeing Bell with them, she thinks she’s Mai’s child. Rin takes Bell in her arms and asks if her father is Taro Sasagae. Mai starts to panic, but Shiori Kirihito interrupts her, explaining that she is the second parent of this child. Taro almost believes that, but then Julian comes back, announcing the tea is ready, and telling Mai that her father, Hōichirō, is calling for her. Rin takes care of the guests.

After a while, Rin and Bell go out into the yard along with the rest, where Mai and Hōichirō are fighting. She keeps the child in her arms all the time. After Mai’s defeat, Bell gazes intently at Rin, and she calls her a kind child, then she encourages her daughter and says she will train her.

During Rin’s training with Mai, Hōichirō is observing their progress. Soon, he turns around and leaves, as he notices Bell staring at him.

After the training, Rin takes Bell with herself, and they both take a bath. While she is washing the child’s head, she asks why Rin and Hōichirō are so kind to Mai. The mother says it’s natural for parents to take care of their children, but is astonished by the fact the girl thinks her husband is kind. Bell asks her if he’s mean, but Rin denies it, and continues explaining that no matter what happens and no matter who the child becomes, the parents will still protect them. The girl says she also wants to be a parent one day, but Rin answers it’s too soon for her. Bell asks one more question – if Mai is able to win. Rin says that Mai probably can win, if she wants to, but the more important thing is that it seems Kajun have called for someone.

After the battle, Bell's soul and memories fully disappeared and Trinity took over for her body afterwards.

Bell on the cover of Chapter 5.

Bell on the cover of Chapter 6.

Bell on the cover of Chapter 7.

Bell on the cover of Chapter 9.

Bell on the cover of BlazBlue: Variable Heart Chapter 11

Bell on the cover of BlazBlue: Variable Heart Chapter 15 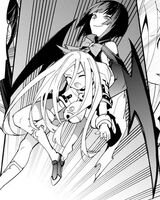 Bell gets kidnapped by Fuzzy.