The Aramasa (アラマサ, taiken) known also as the Blood Scythe, is a sword that was wielded by Ragna the Bloodedge.

In its default form, this weapon takes the form of a sword with a large blade – Ragna uses this form most of the time. The weapon can take a form of a scythe with a crimson blade.

Ragna inherit the sword and his red jacket from Jūbei, who took them from the rubble of the burnt church. According to Jūbei, these items belonged to Bloodedge, a hero of the Great Dark War who sacrificed himself to stop the Black Beast for a year.

During the events of BlazBlue: Chronophantasma, Rachel Alucard sent Ragna back in time to the First Great Magic War, where it turned out that he is Bloodedge. Before his first fight with the Black Beast, Ragna gave his jacket to Celica Ayatsuki Mercury, and after the fight Mitsuyoshi brought her the sword. She kept those items until her death, waiting for Ragna to come back as he promised.

Before Ragna went through the Gate, he left his sword at the entrance. Later, for some reason it was back at the grave of the sister. The next time the grave was shown, the sword wasn’t there. 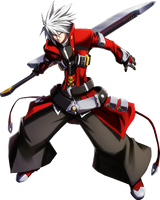 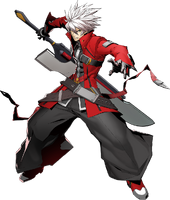 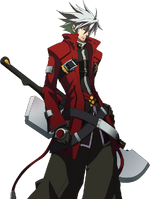 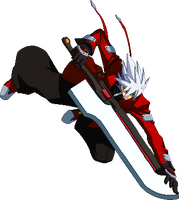