BlazBlue: Remix Heart
BlazBlue: Variable Heart (cameo)
Akane Teruhiko (アカネ＝テルヒコ) was Jin Kisaragi’s roommate when he was still at the Military Academy. He usually hangs out with Taro Sasagae and also works as part of the student council.

Akane is a young man with slightly messy shoulder-length auburn hair which is worn half up. He has bright blue eyes and wears a typical military uniform except he does not wear the uniform jacket, instead, only a military vest with a white collar shirt with folded sleeves accompanied by a white modified ribbon tie.

After he graduated, he wears a standard NOL uniform.

Akane seems to be a calm, collected, kind and mellow person. Although there are times when he has been caught 'checking out' Tsubaki, much to her dismay and retaliates by calling him a pervert. He is known to be sarcastic.

Akane and Taro Sasagae met Jin Kisaragi’s friend, Tsubaki Yayoi, and they later teased Jin about her, making him slightly frustrated at the two’s childish ways. During clean up duty, when they saw Mai Natsume in a maid outfit, he simply called her an idiot for believing Kajun Faycott. During the Torifune Festival, he, Taro and Jin were at the monitor and they wished the competitors good luck. After the Remix Heart made it back to safety, he had to give them the lowest rank. When the climate control broke, he was seen scooping up snow off the school grounds.

Five days later, he is seen passed out, having consumed Taro’s Noel-esque cooking. Later he is seen with Taro and Jin in their beds, recovering. Later he and Taro witnessed Jin’s rampaging and attacking Mai with the Arch-Enemy Event Weapon – Yukianesa, thinking she was Ragna the Bloodedge. 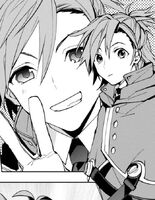 Akane’s cameo appearance at the end of Remix Heart Branch 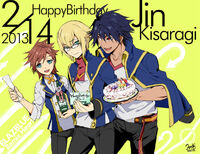